Today I’m pleased to introduce you to Lisa J. Lickel and her new book just in time for Christmas! 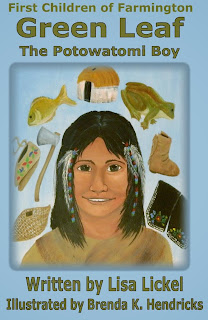 Green Leaf’s cousins are all older than he and don’t like to play fair. He longs for a friend his own age he canplay with, explore and fish with. When he meets a Luxembourger boy, Henri,Green Leaf is sure they could become friends, but Henri’s words are strange toGreen Leaf. How can they play and explore together? Green Leaf’s mother says, “Friends learn to speak one another’s words.” But will Green Leaf learn to say his friend’s words well enough to save Henri when he falls into danger?

Kindle – on special sale during December 1- 16, $.99
Also available in print from online retailers or from your favorite bookseller at $5.95.

Ten years in the making, The First Children of Farmington series of early reader books has finally reached book sellers. I spent two years researching and writing this series. Several years after I worked with other community historians to collect and record our early pioneer history, I realized that we had quite a diverse ethnicity to Farmington, Wisconsin.

Although these stories are based on real people and real events, they are representative of issues and struggles and joys families face every day everywhere. 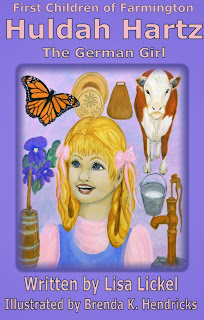 The Potawatomi Boy is a character with a running thread
through all the books. When I first started out with the project I was taking classes from the Christian Writers Guild. I set out to put together a series of picture books and connected with a couple of different artists. I wrote the text, but learned over several years that it’s harder to get the attention of a publisher for children’s books than it is for adult books. I’d never considered self-publishing, but through connections with my current illustrator and publishing partner, Brenda Hendricks, and others at the John 316 Marketing Network, learned a lot about not only self-publishing options, but how to
publish well.
The second book in the series, The German Girl, is now available, as well, about a curious young girl who becomes lost while searching for the family cow, and the third book, The Saxon Boy, about a young boy who must learn to accept a stepfather, may be out by Christmas. I was quite surprised and pleased to have won a prestigious Jade Ring award for the Saxon Boy from the
Wisconsin Writers Association. The other three stories, The Yankee Boy, The
Irish Girl and The French Girl, are planned for release in 2014.
The books include references, glossaries, and special illustrations and a picture search. They are suitable for early to middle grades, ages 7-9 or so.
They are also available at Barnes and Noble and
Booksamillion
Today is the last day of the John 3:16 Marketing Network’s Christmas Book Launch
and The Potawatomi Boy is a featured book. As part of the event, the Network is offering a $200 Amazon gift certificate to one lucky winner. For a chance to win, go to http://bit.ly/Christian_Books
and enter the Rafflecopter toward the bottom of the page.
About the Author:
Lisa Lickel is a Wisconsin writer who lives with her husband in a hundred and sixty-year-old house built by a Great Lakes ship captain. Surrounded by books and dragons, she writes inspiring fiction. Her published novels include mystery and romance, all with a twist of grace. She has penned dozens of feature newspaper stories, short stories, magazine articles and radio theater. She is the editor in chief of Creative Wisconsin magazine. Lisa also is an avid book reviewer, a freelance editor, a writing mentor, a hostess at Clash of the Titles.com, and enjoys blogging at theBarnDoor.net and AuthorCulture.blogspot.com. She loves to encourage new authors. Find more at LisaLickel.com.