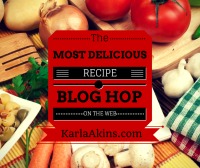 This is a recipe blog hop! Go here to get the button and join us each week: The Most Delicious Recipe Blog Hop.

Then add your recipe post to mine with the linky codes at the end of this post.

Whether you’re a paleo, vegetarian, southern cook, or baker, you’re welcome to join me and post a weekly recipe! 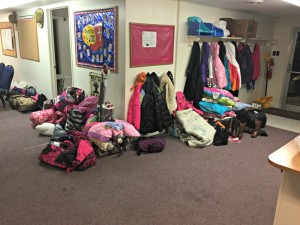 It’s been a long cold winter in NE Indiana. The kind of winter that calls for lots of comfort food. (Thank goodness for baggy sweaters!)

Last Friday I invited all the girls at our church, ages K-12 grade, to a Pinterest cooking sleepover. It was a total blast and I can’t wait to share the recipes we tried! I’ve been collecting Pinterest recipes for a long time on my Pinterest board. I will never find enough time to make all of them, but having a cooking sleepover allowed us to make and try six different fattening and  delicious recipes! Some were a hit and others were so-so. All were kid-friendly and fun. 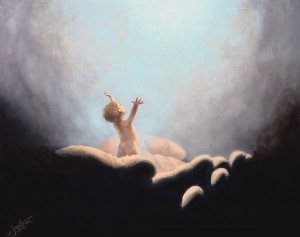 Before we started our cooking activities, I reminded the girls how God made us with His hands and how special we are to Him. I asked them to remember as we worked with our hands, how God loves what He made just as we love what we make. I reminded them that they are royalty–the daughters of the King of Kings. 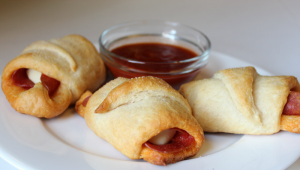 Bing free-use image. I forgot to take pics of our finished products but this is exactly how we served them up!

This was so easy and the kids loved doing it. They were delicious, too. 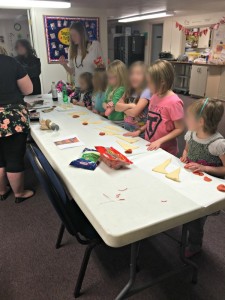 I spread parchment paper all along the table and after the girls washed their hands, gave them each two crescent roll doughs, five pepperonis and a handful of mozzarella cheese. Most recipes call for a stick of string cheese, but using grated cheese was less expensive. 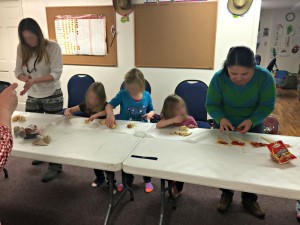 I had the help of three other adults and the older girls pitched in and helped the younger girls. This activity worked for all ages and all abilities. One of our teens has autism and an intellectual disability and she had no trouble participating like everyone else. We all had fun eating the pepperoni and cheese, too, as we worked! 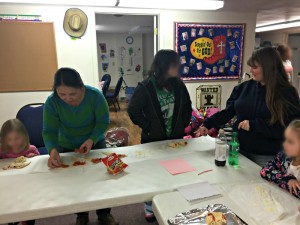 We used cupcake paper to put the spaghetti sauce in for dipping when we served them. The girls loved them. They were surprisingly filling, too! (Uh, the roll-ups, not the girls!)

Since we have a western theme going on for our Children’s ministry, while the roll-ups were cooking, I read them a cute little book about a little cowboy and a very bossy cowgirl who’s a know-it-all: Conrad and the Cowgirl Next Door. We talked about how to be a good friend and the difference between being bossy and being a leader. The book also emphasizes forgiveness, so we were able to discuss that as well. (And yes, the teen girls were just as engaged. I find that teens love story books.) 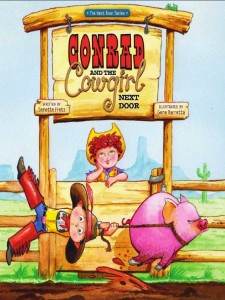 The next thing we made were loaded nachos! I modified a very spicy recipe for little girl palates so it wasn’t so hot. We used Scoops brand Tostitos for the girls to put the filling in themselves. (Adults mixed the filling.) 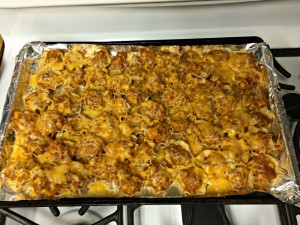 Mix together and put in Sccops shells (you could spread this over a pan of chips, too)

Other recipes include beef or chicken, jalapenos and avocados. Any mix like this can be modified to your family’s preferences.

After the shells are filled, sprinkle Mexican mix cheese (Colby and cheddar) over top. Put in oven for a few minutes until cheese is melted on the top. Serve.

This recipe made two full cookie sheet pans. The picture above doesn’t do justice to how delicious this was! And all the adults agreed these would make great little hors d’ourves for a party! 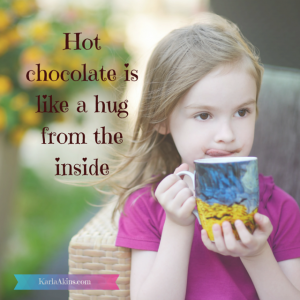 Again, I modified a Pinterest recipe. If you do a search on Pinterest for “Crock-pot Hot Cocoa” you’ll find lots of variations. Here’s what I put in our 8 quart crock-pot (this is not diet-friendly by any means but it’s delicious!)

Heat in crock-pot on low being careful not to scald it. Stir often as the chips melt. When I served it to the little girls I added cold milk to their cups to cool it off. I served the adults straight up and hot. We didn’t have any marshmallows but I think that would have ruined it, actually. It was so good! 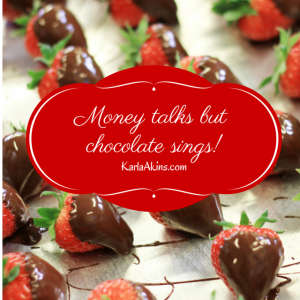 We had beautiful red, juicy strawberries but my method of making dipping chocolate bombed. I’d read a blog from Pinterest that said you could just melt chocolate chips. Don’t believe it. I knew better because I’ve helped my friend make candy before and she’s super picky about “tempering the chocolate.” But, I thought I’d try it. 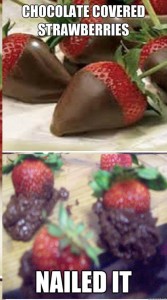 If you’re going to dip chocolate, get a dipping chocolate. That’s my number one recommendation. It really is a science. Bakers has a great dipping chocolate for the microwave that is super easy to use.  I’ve used it in a special education class before and you really can’t ruin it.

Next time I’ll use a chocolate fountain. I’ve successfully used those before without failure.

So what happened? I must have gotten the chocolate chips too hot and they hardened in the bowl. So I added butter and it helped some, but still it wasn’t thin enough for dipping. So I gave each girl a spoonful of chocolate in their own little bowl and plopped their strawberries on them. And, as it often does when you cook a flop, those strawberries and chocolate were the most popular treat of the night!  Everyone begged for more. 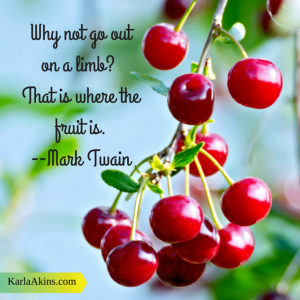 Who doesn’t love cherry pizza? The teen girls made this easy-peasy treat and we served it for breakfast:

Roll out the pie crusts (we used two pie crust to make two pizzas) and slather with butter. Bake until browned. Remove from oven and spread 1 can of cherries on each pie crust. Drizzle with cream cheese frosting and granola. Serve.

We didn’t put the frosting and granola on the pizzas until the next morning. (We re-heated the pizzas first.) They disappeared fast! Nothing was left! 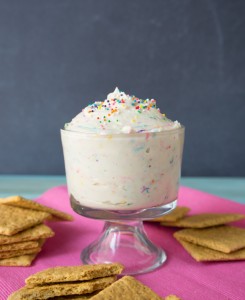 The girls’ favorites were the strawberries. But my favorite was this dip. I was exhausted by the time we got to this point and it felt so good to settle in with my hot cocoa and this dip with graham crackers. The teen girls mixed this one up themselves. It was sooo good! Instead of serving it dip-like, we frosted graham crackers with it for the little ones. Us older girls dipped to our heart’s content.

I found this recipe on Pinterest but the pin was taken straight IWashYouDry.com (see URL on the picture caption above). There are other variations on this recipe on Pinterest using Funfetti cake mix, so check those out, too. I chose this one because I love the tang of cream cheese and sour cream. Our first batch tasted “funny” and I think it was the vanilla. I think we got a bad bottle. So we threw that batch out and made another without the vanilla and it was scrumptious.

I can hear the Mommies of the Year yelling at me about how unhealthy these treats were. This is not something I recommend serving on a regular basis. These were party foods. One night of supreme, delectable indulgence.  And because there were so many of us, there was little chance of over-indulging.

Besides, I’ve promised the girls that at our next sleepover in the summer, we’ll have a pool party and consume copious amounts of fruits and vegetables to make up for it! I see lots of smoothies in my future.

If you have any cute raw fruit and veggie recipes, send them my way! 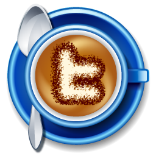