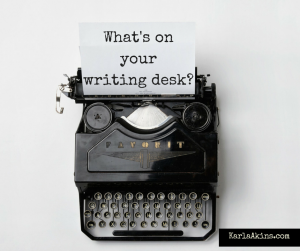 Today we get to peek inside the writing lair of Pegg Thomas! I love the simplicity and peacefulness of her space. I think you will, too.

Pegg lives on a hobby farm in Northern Lower Michigan with Michael, her husband of *mumble* years. They have barn full of animals, a large garden, a small orchard, and a growing berry patch.

Besides writing, she enjoys a variety of crafts including spinning sheep’s wool into yarn, knitting, counted cross stitch, quilting, scrapbooking, and card making.

She and Michael enjoy camping, fishing, boat-nerding (you have to be a Great Lakes person to understand that), and thoroughbred horse racing.

Pegg has been a finalist in the 2013 ACFW First Impressions Contest and the 2014 Clash of the Titles Olympia. When not working on her latest novel, Pegg can be found in her garden, in her kitchen, or on her trusty old horse, Trooper. 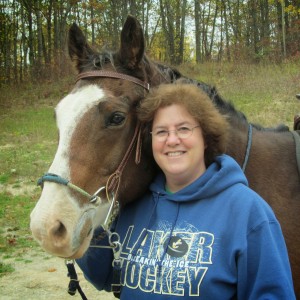 A lifelong history geek, it’s no surprise that I write surrounded by my antique treasures. My “desk” is a Singer sewing machine cabinet that belonged to my maternal grandmother, Kathryn Champanois. The old black A-1 Singer is still inside and I love to sew on it still.

To my left is a dresser that belonged to my maternal grandfather’s mother, Margaret Warner. Sitting on top is a bowl and pitcher as would have been common in a bedroom before indoor plumbing. 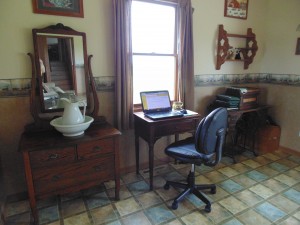 To my right is another sewing machine, a Wheeler and Wilson treadle that pre-dates Singer, made in the late 1880s. It belonged to my paternal grandmother’s mother, Mable Wright. This cabinet pre-dates fold-down models and instead has what’s called a “coffin top” of wood that covers the machine.

Surrounded by such treasures makes slipping back in time an easy and enjoyable thing to do. 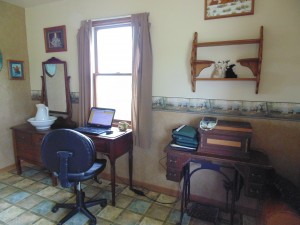 Pegg writes historical fiction with a touch of humor. Her current WIP (work-in-progress) is the second novel in a trilogy set around the turn of the 19th century in America. The historical background of this series is the Quaker migration from the slave holding southern states to the new Northwest Territory of present day Ohio, Indiana, and Illinois. The first novel is represented by her agent, Linda S. Glaz.

You can find Pegg here: 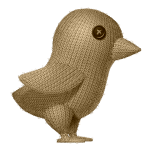 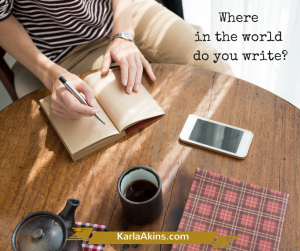 Would you and your writing spaces like to be featured on my blog? Find out how!