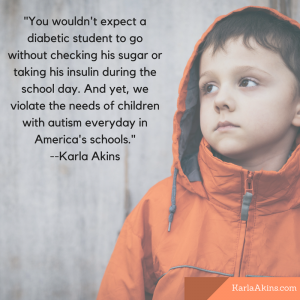 What kind of society yanks a 10-year-old child with autism from school in the middle of the day, tears him away from his mother (who had NO notice until the moment it happened), and throws him in jail for something he did months ago?

The United States of America. Land of the free. Home of the brave. Aren’t we something? Makes you real proud to be an American, doesn’t it?

Yeah, we really protected society  from danger by cuffing little John Haygood’s hands behind his back and escorting him out to a police car in front of God and everybody in the middle of a school day.

“Excuse me, do you have any paperwork or anything you can show to me?”

John’s mother didn’t have the faintest idea why her son was being taken away in a police car. They finally told her he was being arrested for leaving scratches and marks on a teacher back in October 2016. Felony battery. And now it’s April 2017. Yeah. That’ll teach him. He’ll definitely connect the cause and effect of that one. (Not.) 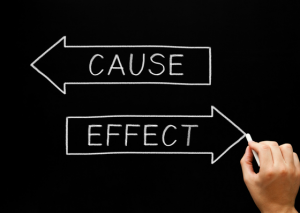 Since when does our society think it’s appropriate to arrest a 10-year-old boy at school in front of God and everybody in the first place?

The most troubling thing isn’t this one incident, but the fact that this is one of many, many incidents like it. Far too many schools resort to police interference in the elementary school setting. (What better way to condition children to accept a police state? But that’s another discussion entirely.) What I want to focus on here is the lack of common sense schools exhibit when it comes to helping kids with autism succeed in a classroom setting.

Now, don’t get me wrong. I’m a teacher. I don’t relish being kicked, scratched or punched by a student. My granddaughters attend public school. I don’t want them hit or scratched by an out-of-control child. Let’s be clear: I’m not condoning bad behavior. My beef is with the lack of in-class support given teachers and students with autism so that this situation doesn’t occur in the first place. If a student with autism is placed in a regular classroom, and expected to act like regular students, then the school should provide every support necessary for that student to succeed. Instead, from the sounds of it, the student and teacher were set up to fail. 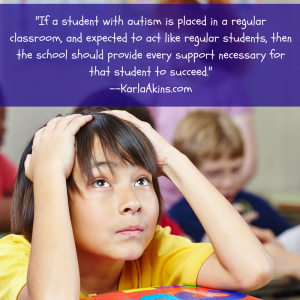 How do I know this when I wasn’t there? Because a child with autism with proper support won’t throw paper balls in class, hurt other students and teachers, or be on his own to react to a reprimand the way this child did. And a teacher, well-trained in autism, won’t react to an autistic student’s behavior in an in-your-face confrontational way, or grab a student with autism and bodily remove him from a classroom.

I know because I have taught students with autism as well as my own children. Children with autism cannot have open-ended expectations and succeed. That’s like asking a child with paralysis in his legs to navigate the school halls without his wheelchair. You don’t physically man-handle any child, leave alone a child with autism. Tactile defensiveness sends the brain into fight or flight mode in kids with autism. You wouldn’t expect a diabetic student to go without checking his sugar or taking his insulin during the school day. And yet, we violate the needs of children with autism everyday in America’s schools.

Most schools in America don’t get this. But they better figure it out because according to the CDC, 1 in 42 boys have autism now.

If that statistic isn’t enough to make you shudder, you ain’t got a shudder button. I don’t know about you, but when I was growing up, I don’t think I even met someone with autism. And now, 1 in 42 boys have it.

If that statistic doesn’t  shout out the fact that your typical children or grandchildren will share a classroom with a child with autism, then you ain’t comprehendin’ what I’m tryin’ to say here. 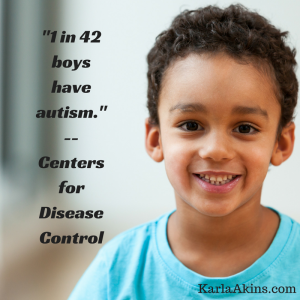 This problem  of inappropriate services for students with autism isn’t going away. In fact, it’s only going to get worse. And yet, schools in general don’t take the time to train staff about autism, or provide the sensory tools students need to get through a day. Sooner or later a school is going to get sued. And when it happens, I hope it wakes up the whole lot of them.

We don’t expect blind students to read the same textbooks or navigate the building the same way typical students do without the tools they need. But schools expect students with autism to. Far too much  is asked of teachers and students and no tools are provided. How do I know? I’m the mother of twins with autism. I wrestled myself with the schools. I’m now teaching in a public school and I see the lack of support with my own eyes. I experienced the lack of support when the twins were growing up and homeschooled them for almost all their elementary and junior high years. 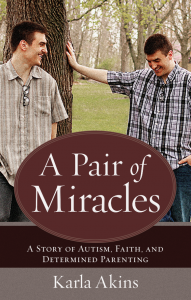 My book about my twins with autism. Release Date: July 2017!

When I speak of support, I’m not talking moral support. I’m talking about visual boundaries, a 1:1 aide, visual schedules, and the most important thing of all: keeping the student with autism meaningfully engaged. An engaged student doesn’t have negative behavior. Yes, there are exceptions. There are students who refuse to be engaged. I understand that. But most negative behavior stems from students not being effectively, and meaningfully engaged. The activity must have relevance. It must have a clear beginning and a clear end. Students with autism can’t be expected to sit in an open-ended classroom without proper guidance and 1:1 support.

Society, in general, likes to call kids with autism brats. Americans and the world in general are sick and tired of hearing about autism. But they’re obviously not tired enough because we don’t know why 1 in 42 boys have autism now. When will the experts take a good hard look at this epidemic? When the statistic becomes 1 in 2?

When people told me that I needed to spank my sons with autism, I invited them to my house for one hour. One hour. Spend one small hour with my sons and tell me that all they need is a good spanking.

Funny. No one took me up on it. Doesn’t matter. I guarantee you they wouldn’t have lasted more than five minutes back then. (We’ve come a long way!) 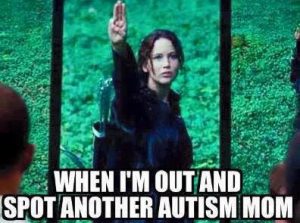 Society also wants to believe the rumor that more kids are diagnosed with autism because it’s the new trendy disorder, much like they assumed ADHD to be in the 90s. But that argument doesn’t hold water because autism is the only disorder dramatically on the rise while intellectual disabilities, Down Syndrome and Cycstic Fibrosis remain relatively the same. Something is wrong. Very wrong. And whether or not we find out the reason behind these brains that fire differently and explosively, we’ve got to address the current crisis effectively. Most public schools simply don’t.

My challenge to you is this: find out how your school supports students with autism and then let me know in the comments below.

Does your public school have:

My guess is the answer is no. And folks, that’s just the basics a school should be providing. Just. The. Basics. Instead, most schools are terrified of having to provide something like the list above because it may cost more. Well, guess what. We either take care of the kids diagnosed with autism intensively at the preschool-3rd grade level, or we support them the rest of their lives.

So, until the public schools stop brushing students with autism aside (and hoping and praying to God that their parents will remove them from school and keep them home), kids like John will continue to be arrested, handcuffed, and taken to juvenile detention centers for overnight stays. (I can’t imagine the horror his mother and he went through. She wasn’t even warned of any warrants for his arrest!)

It’s unconscionable. Frankly, it’s child abuse. Students with autism need advocates to stand up for them. I hope you’ll join me in adding your voice to mine.

Public School’s Answer to Autism: Jail first appeared on KarlaAkins.com. Karla Akins is a public school teacher and the author of A Pair of Miracles: A story of autism, faith and determined parenting published by Kregel. Release: July 2017.